The Local Food of Kagoshima

If you're going to Kagoshima you must try the Berkshire Pork Wazeeka-don (rice bowl). Wazeeka means "amazing" in the local Kagoshima dialect and this dish is known as being "wazeeka delicious!".

Member restaurants of the Kagoshima Foods association all compete to sell their own best "wazeeka" version of this local dish, no matter whether their main business is as a restaurant of Japanese, western or even Chinese food. 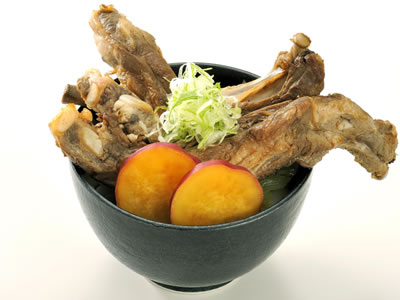 This dish is created by the result of the Merchants of the Ibusuki Shopping Districts and the local Chamber of Commerce getting together to promote a local Ibusuki delicacy upon the opening of the bullet train lines throughout Kyushu.

As they set the requirement for this new dish to be created with regional ingredients, speciality onsen egg eggs cooked in their famous local natural sand steame baths, which egg is also from the local area, Yamakawa in Ibusuki City, was proposed to be used for the dish.

The name of the dish comes from a play on words in the combination of two phrases - "onsen-tamago" is Onsen eggs and "oishikute tamaranai" means "absolutely delicious". Thus, "Onsen-Tamaran"-don (bowl) was created.

This dish can currently be enjoyed at around 20 member restaurants within Ibusuki city. 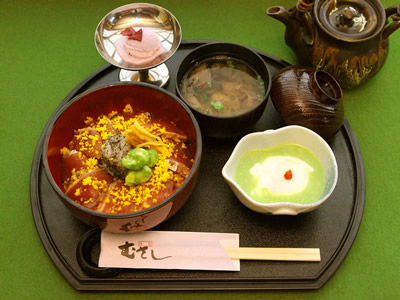 This new dish was created by the volunteers of the local Food Co-op in Makurazaki after numbers of researches and experiment. Katsuo Ramen boasts a soup made with plenty of katsuo (dried bonito flakes) and ramen noodles containing DHA omega-3 topped with a variety of ingredients. This bowl of ramen which can be enjoyed with your mind as well as your body and is available in 3 restaurants in Makurazaki city. 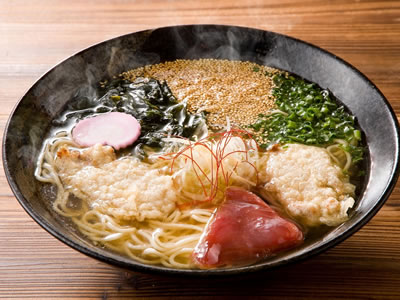 This local food was developed by a Makurazaki city community association to revitalize the shopping districts. The dish won the "Best in Show Gourmet Grand Prix" in the Kagoshima Shopping District's competition to decide the best dish in the prefecture for 2 years in a row (2011 and 2012) and was admitted into its "Hall of Fame". Inspired by local fishermen who prepared and ate freshly caught bonito with rice on their boats, this meal has been modernized and contains fresh bonito fish and other toppings served on rice.

9 restaurants in Makurazaki city serve the dish and each restaurant has its own unique toppings and flavors. 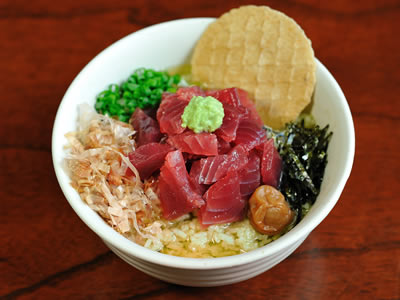 This dish was developed by a Makurazaki city community association and local restaurateurs after numbers of researches and experiments with the purpose of creating a dish similar to what local workers at dried bonito factories eat.

It won the "Best in Show Gourmet Grand Prix" in 2014 at the Kagoshima Shopping District's competition to determine the best meal in the prefecture.

7 restaurants in the Makurazaki city area serve the dish and each restaurant has its own unique toppings and flavors. 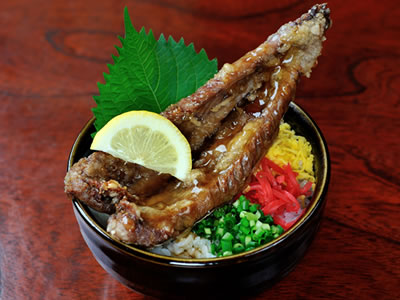 Akumaki is made by marinating mochi (pounded rice) in "aku" (wood charcoal juice) for a day and a night, wrapping it in bamboo leaves and boiling it for a further 3-4 hours. It can be enjoyed with kinako (toasted soy bean powder), brown sugar syrup or soy sauce depending on your preference. First made in war time for army provisions, the dish is now well-known in the southern Kyushu area.

You can try Akumaku in most areas of southern Kyushu including Kagoshima, Miyazaki and Kumamoto. 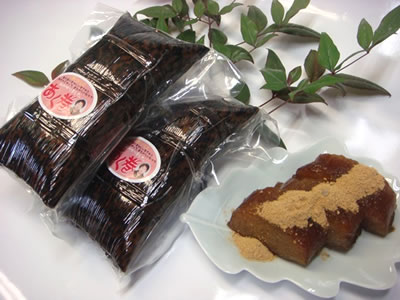 This dish utilizing both local chicken and eggs was created as a PR exercise for Izumi City with the fact that Izumi city in Kagoshima has the second highest production of chicken meat and eggs in Japan but it is relatively unknown somehow. 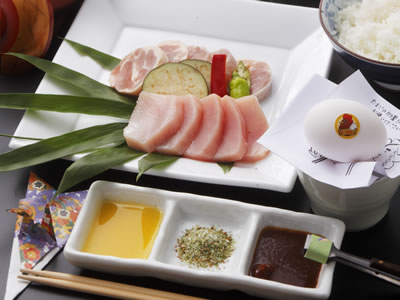 Goat meat is one of the traditional local foods of Kikai Island. In the past, every family owned goats as part of their livestock. Goat meat isn't suitable for special occasions due to its strong smell, however it would be eaten a few times a year for the nutritious protein and overall nourishment it provided. It is now eaten as a food to welcome guests and most local Izakayas (Japanese pubs) serve goat meat. It might be a flavor you will get hooked on and not something you can eat every day. 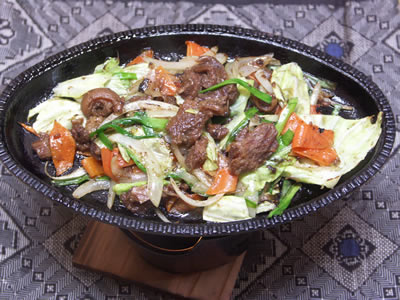 Having been enjoyed for a long history, it is said that this manju (rice cakes filled with sweet bean paste) began when they were served with tea to workers who spent 2 years from 1606 building a stone bridge (Rankan bridge) for the Lord Yoshihiro Shimazu when he moved into Kajiki castle.

The outer layer is made predominantly with glutinous rice and malt, mixed with a unique sweet rice wine for a good aroma, and the cakes are filled with azuki bean paste to complement the flavor. These simple manju with a complex flavor are popular in Aira city and are a common souvenir.

In the Kajiki area of the same name as the manju, there are 7 specialty stores making and selling Kajiki Manju. One manju costs between 80 and 90yen. There are a number of variations in the flavor of the outer rice and the bean paste inside, but this traditional Japanese sweet methods are still being used after 400 years. 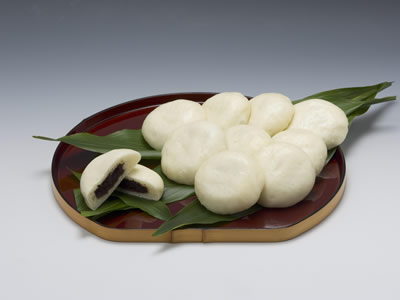 A soul food popular with locals in the Aira area. "Pork chin" doesn't refer to the part of the animal but the brand name. It is said that a local butcher began marinating and selling part of the meat from pig heads under the name "pork chin"around 30 years ago in Hayato-cho in Kirishima City. Then butchers in Aira city later began to sell the meat as well and the flavor has become a familiar favorite among the locals.

This dish is always included on the table for a large gatherings of families and friends, this versatile meat can be used in any cooking from Japanese BBQ to curry, to deep-fried dishes and stews. Different local restaurants use different cuts of meat included the cheeks or the forehead. 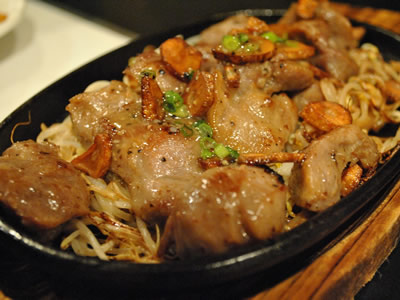