The Local Food of Nara

Rice porridge made on green tea was served as a ceremonial meal at Todaiji Temple Nigatsudo Hall’s sacred water-drawing festival, an event began 1,200 years ago.

As an everyday food for the common people, in Nara it is said that “the day starts with traditional rice porridge”, and the dish is tenderly referred to as “okaisan” in place of the usual “ochagaiyu”.

Nara’s traditional rice porridge is known for its simplicity and lack of stickiness. The dish can be enjoyed throughout the different seasons, eaten chilled in summer or with additions such as sweet potato or persimmon rice cakes depending on the time of year. 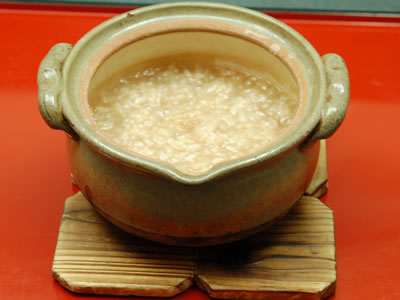 The dish joins traditional rice porridge on the menu for the water drawing festival of Todaiji Temple Nigatsudo Hall. It was traditionally eaten in the quarters of temple priests, however it spread to the masses in the Edo period (1603-1868) and tea rice restaurants were found in many different areas. It is also a dish favored by gatherings of haiku poets and is sometimes made with black soybeans or dried chestnuts in place of the usual roasted soybeans. 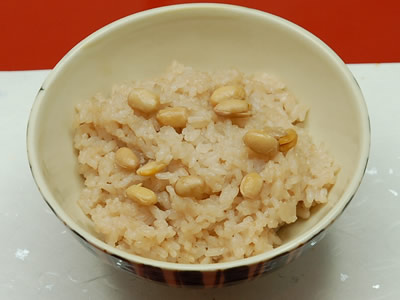 A summer festival food comprised of a large mouthful of mackerel sushi wrapped in a persimmon leaf. The story goes that to make money in the middle of the Edo period (1603-1868) when a heavy tax was imposed in the Wakayama Prefecture area, fishermen salted mackerel they caught at the Kumano seashore and took it over the mountains to sell at villages along the Yoshino river. It just so happened that this coincided with the summer festivals in the villages, and from that time on the dish has been associated with the festivals.

Leaves of the astringent persimmon are used for their high level of tannin, which gives them a bright green color. In the Higashi Yoshino region magnolias grow naturally in the mountains and their leaves are used instead of persimmons in “magnolia leaf sushi”. 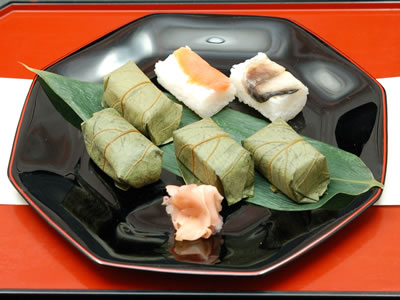 Mehari rice balls are made with warm rice wrapped in pickled leaf mustard or rape mustard leaves grown in the Yoshino area. In Yoshino one year’s worth of mustard leaves are pickled all at once in spring. The rice balls are a local food used in packed lunches for mountain workers, and once upon a time all households would make their own.

The word “mehari” refers to wide open eyes, and it is said that the name of the dish comes from the saying that the rice balls are so big that one can’t help but bite into them with both their eyes and mouth wide open. 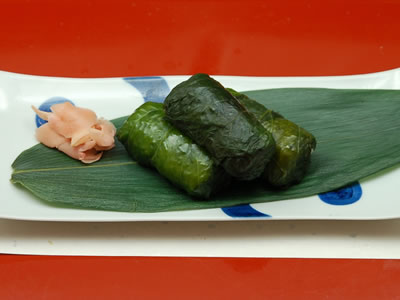 The method of kneading flour and drying it in thin, long strips to make somen noodles was introduced from Tang in China in the Nara period (AD 710 to 794). Mt Miwa, center of Yamato (ancient) Japan according to the Miwa Legends, is said to be the birthplace of the technique.

Since the Edo period (1603-1868), Yamato Miwa somen are known for being as thin as a the string of a Koto and as white as snow, still being created in the harsh climate of mid-winter by a unique hand-pulled technique today. Boiled noodles, as the name suggests, are somen noodles boiled and topped with seasonal produce. 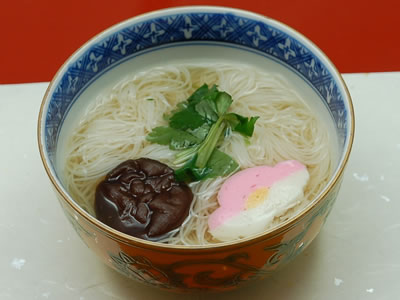 The on-matsuri festival held every year at Kasuga Taisha Temple on the 17th of December celebrates the end of a year, and in Nara, it has long been the tradition to eat noppe soup on this day.

In the northern Tohoku and Hokuriku regions of Japan, traditional noppe is made on a broth of vegetables and chicken with corn flour or something similar added to thicken the broth. However the noppe soup of Nara is made on taro with boiled horseradish, garlic, burdock root and fried bean curd, with the taro giving the soup a natural thickness. 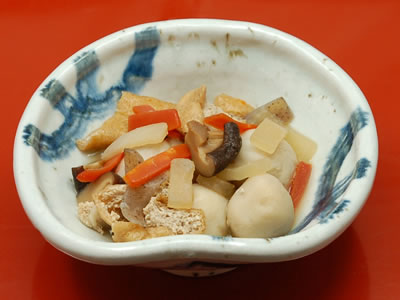 Persimmons are one of Nara’s seasonal delicacies. The sight of trees laden with deep red persimmons in autumn or dried persimmons hanging under the eaves of houses in late autumn embodies the quiet beauty of Nara. Hung, dried persimmons removed of their astringency are especially sweet and much like a high quality Japanese sweet.

Chopped persimmon added to the red and white of vinegar horseradish and carrots is one staple in Nara’s traditional “osechi” dishes eaten at the new year. It is also said that adding dried persimmons to vinegar dishes replaces the need for sugar. 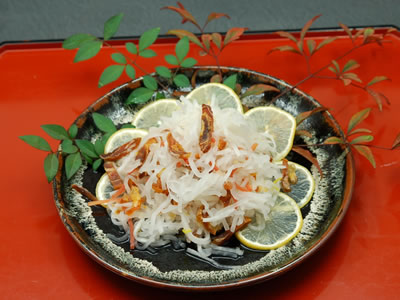 A number of stories exist about the origins of this dish: 1,400 years ago in the reign of the Suiko emperor, people who came from Tang in China brought it to the area; a Buddhist priest created the dish 1,000 years ago; monks who came to Japan from Tang in the Asuka period (AD538-710) started cooking with goat’s milk to combat the cold. Whatever the case, this chicken hot pot has its origins in foods cooked in milk. 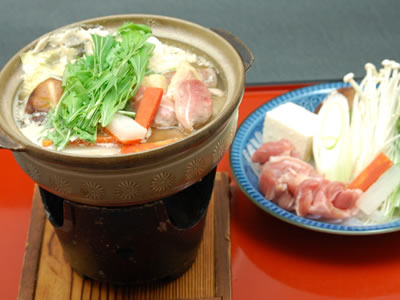 Yamato-mana is a type of pickled leafy vegetable that has been grown in Nara prefecture for many years. In Nara, Yamato-mana and other leafy vegetables are commonly cooked with fried tofu and soy sauce, which complement the vegetables. Quickly stewing the greens to preserve their color also retains their crunchiness, and, on eating, the sweetness of the Yamato-mana leaves fills one’s month. This dish is also used as an addition to hot pot dishes. 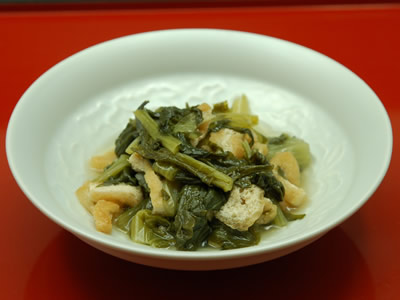